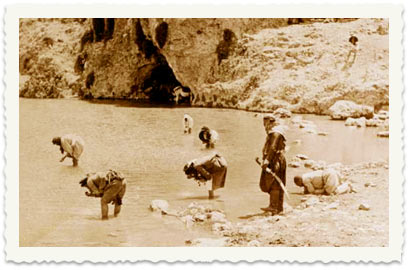 In the book of Judges, Gideon is called to defeat the Midianites. His army is too big for that, so he is told to send many soldiers home:

2 And the Lord said to Gideon, “The people who are with you are too many for Me to give the Midianites into their hands, lest Israel claim glory for itself against Me, saying, ‘My own hand has saved me.’ 3 Now therefore, proclaim in the hearing of the people, saying, ‘Whoever is fearful and afraid, let him turn and depart at once from Mount Gilead.’” And twenty-two thousand of the people returned, and ten thousand remained. (Judges 7, 2-3)

This event happened near the spring of Harod, in the Jezreel valey. This place is more than 25 KM (15 miles) from Mount Gilead.

But the origin in Hebrew says something a little different. It is said to the people that are afraid to ‘go and watch from Mount Gilead’. In Hebrew the verb is “Yitzpor” (יִצְפֹּר) which means to ‘watch as a bird’.

So the people that were afraid were instructed to watch the battle from the mountain. Going 15 miles away may be too far to watch.

Moreover, Mount Gilead is where the Midianites came from. It does not make sense to send the people that are afraid out of their land to the land of the enemy.

How can we explain this?

The Hebrew meaning of Gilead

The Hebrew language in the Biblical times did not have vowel points. The vowel points were introduced into Hebrew only during the middle ages.

So if we take the Hebrew word ‘גלעד’ – Gil’ad, we can also pronounce it Gal’ed.

Both of those appear in the Bible with different meanings: Gil’ad is the name of the mountain ridge east to the Jordan river, whereas Gal’ed means a heap of stones.

Up on mount Gilboa – this is the mountain beneath which Spring of Harod flows – up on the mountain was found an ancient heap of stones – Gal’ed. Can this be the place where the people who were afraid were sent to watch? It is quite probable…

Another heap of stones

This word is used in the bible when Jacob and Laban set a covenant:

44 “Now therefore, come, let us make a covenant, you and I, and let it be a witness between you and me”. 45 So Jacob took a stone and set it up as a pillar. 46 Then Jacob said to his brethren, “Gather stones.” And they took stones and made a heap, and they ate there on the heap. 47 Laban called it Jegar Sahadutha, but Jacob called it Gal’ed. 48 And Laban said, “This heap is a witness between you and me this day.” Therefore its name was called Gal’ed, 49 also Mizpah, because he said, “May the Lord watch between you and me when we are absent one from another. (Genesis 31, 44-49)

Laban and Jacob want to make a covenant. They need to make some physical witness for their covenant. What do they do?

One interesting point here is that the heap of stones is used as a witness for covenant, but also a place for watching. This is very much like our story with Gideon: The people that were afraid were sent to the place of watching which is also the witness heap of stones.

Laban and Jacob call the heap the same name but each in his language. Jacob use Hebrew, therefore he calls it Gal’ed. Laban is Aramaic, and uses the Aramaic Language. Jegar Sahadutha in Aramaic is the same as Gal’ed in Hebrew: Jegar: heap of stones, Sahadutha – witness.

The Aramaic Language is very close to the Hebrew Language. Some parts in the Bible are written in Aramaic (chapters in Daniel and Ezra) and for the Hebrew reader are not very difficult to understand. Those two languages are Semitic languages.

Arabic is also a Semitic Language, but in a way not as close to Aramaic as Hebrew.

Still here, we find a word that is common to Aramaic and Arabic but not to Hebrew:

This concept is probably taken from Christianity, where the term Martyr, a Greek word that means the same thing, was used by the first christian believers much before Islam was founded.

We saw here that the physical witness  – a heap of stones – was very important in the ancient Biblical times.

The Arabic word Shahid, is close to the word Sahadutha from the Bible and has the same meaning: Witness. The concept of Shahid was not invented by Islam but existed in early Christianity as Martyr.

Many ideas that we see in Islam, were originated from the Bible and from Christianity,  But Islam gave them some twist.