“You shall also make a lampstand (menorah) of pure gold; the lampstand shall be of hammered work. Its shaft, its branches, its bowls, its ornamental knobs, and flowers shall be of one piece…”

But we know that Bezalel the son of Uri made the Menorah after Moses’s instructions (Exodus 38,22).

The original Menorah from the second temple was lost in Rome after the destruction of the temple in 70 A.D.

The most common and famous model is on the arch of Titus in ancient Rome. 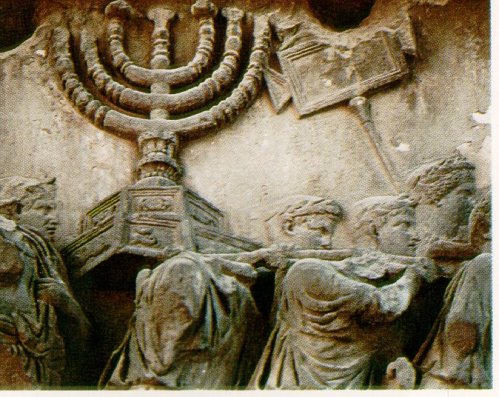 The interesting part of it is the base. In the arch of Titus, there is a base that looks like an hexagonal box of two parts – a smaller part on top of a bigger part, and is decorated with drawings.

The Menorah was found in some mosaics on floors of several ancient synagogues. 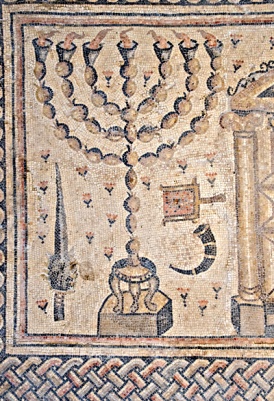 Note that those Menoras have three lion legs and not the hexagonal boxes!

A coin from the time of the Maccabee kings, 37 BC, show a different base. A round wide base.

This image also appears on the 10 Agorot of modern Israel today.

So how did the base of the Menorah look like?

A few years ago, an important stone was found in the synagogue of Magdala near the Sea of Galilee.

On that stone, there is a carving of the Menorah:

This carving is not very sophisticated, but resembles the base that is seen on the coin from the Maccabees. A round wide base. No lion legs and no hexagon boxes.

The importance of this stone, is that it was made in the first century A.D. in the time of Yeshua and of Mary Magdalene who came from the village of Magdala.

So this carving was done by an artist that saw the Menorah in the Temple before it was destructed.

We can be quite sure that this is how the Menorah looked like.

What about the other bases that were found?

The bases that look like lion legs are all from mosaics in synagogues from the Byzantine period. They are dated to the third to sixth centuries. The artists that made them did not see the original Menorah and therefore they are not authentic.

It is possible that this is the idea that the people had about the Menorah in the Byzantine time, as they could not see it.

And what about the base seen in the arch in Rome?

The carving on the arch of Titus if very precise. But there is a real problem about it. There are drawings on the base that look like pagan drawings.

Some researchers suggest that the base that appears in this image was made by the Romans when they took it to Rome. The original base is either hidden inside this box or was broken and replaced by the box.