“Now Joshua sent men from Jericho to Ai, which is beside Beth Aven, on the east side of Bethel” (Joshua 7:2)

The city of Ai is the second city that the sons of Israel conquered in the land of Canaan, after Jericho.

The identification of the location of the city of Ai is one of the most controversial topics in Biblical archeology and research.

As explained in another post, many of the names of Biblical sites are revealed in Arab villages names.

Two of the places quoted above from Joshua 7:2 are identified using Arab synonym of existing places:

The other two places: Ai and Beth-Aven do not have an Arab village name that preserves their location.

What did the writer of the book of Joshua know?

Looking back to the quoted text, you may notice something very interesting: The writer needs to explain where the Ai is, and he explains this by references to two different places: “Ai, which is beside Beth Aven, on the east side of Bethel“.

What is the meaning of this? Well, obviously, when this book was edited, people did not know where the Ai was, but they DID know where Bet-Aven and Bethel were. So the writer could tell them the location by reference.

For example, if a visitor comes to your city and asks you where is the location of a certain bank branch, you may tell him: “Go to the central station, and three blocks after McDonald’s you will see the bank”. You give instructions to a place that is not known by referring to places that are known.

Another such example can be found about Shiloh in the book of Judges:

“There is a yearly feast of the Lord in Shiloh, which is north of Bethel, on the east side of the highway that goes up from Bethel to Shechem, and south of Lebonah” (Judges 21:19)

Here again, in the time that the book was written, Shiloh did not exist (was destroyed by the Philistines in the battle of Ebenezer). So it was pointed by reference to Bethel, Shechem and Lebonah that existed in that time.

Back to our topic: we learn that the location of the Ai was not known in the time of writing the book of Joshua, but Bethel and Beth-Aven were known. This fact will be very important later when trying to identify where the Ai is!

“And he moved from there to the mountain east of Bethel, and he pitched his tent with Bethel on the west and Ai on the east; there he built an altar to the Lord and called on the name of the Lord.” (Genesis 12:8)

Another quote about Abraham that set his tent “with Bethel on the west and Ai on the east” led American Biblical scholar Edward Robinson, and later William Foxwell Albright, to identify the Ai with a little hill that is called in Arabic ״Et-Tell״. The location was perfect! Even the Arabic name Et-Tel that means “The ruin” was a good sign as Ai in Hebrew also means “heap of ruins”.

in the 1930s, the first archeological expedition started to excavate the place. The archeologists started with a great excitement and the Baron Rothschild funded the excavation. Everyone thought that they are going to bring the story of  the Bible to life.

But then, a bitter surprise: In 1935, after examining the finding of Et-Tel, the report showed that indeed there was a Canaanite city in this place. The city had a wall, a fortified palace and Canaanite temple. And this city was burned to ashes around 2100 BC.  Around 1000 BC, during early Israelite period, a small village was built again in the site for about 200 years.

Could it be that the sons of Israel led by Joshua burned that big city? NO!!! The conquest of Canaan by Israel dates to, according to the different scholars, between 1450 BC to 1200 BC. Those who count according to the Bible take the earlier date, and other archeologists choose the later date.

But in any case, when Joshua entered Canaan, the fortified city that was found in the ruins in Et-Tell was already destroyed for at least 600 years! 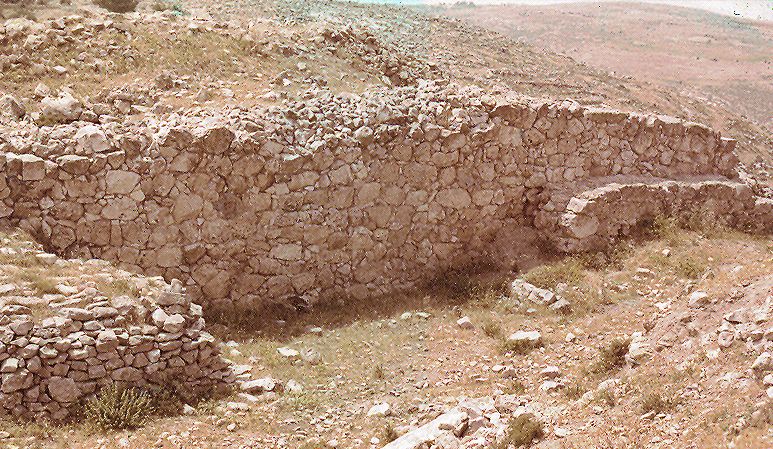 How can sort out this confusion?

The resolutions to what was found in the excavations in Et-Tell went in two different directions, depending on the point of view of the beholder:

I want to focus on one very interesting solution to this perplexity that was suggested by Prof. Yehoshua Meir Grints who was a Bible scholar in Tel Aviv university. His analysis is described again by Prof. Yoel Elitzur in his book: Places in the Parashah.[1]

Let’s go back to our key verses:

In Genesis, the Ai is east of Bethel and Beth-Aven is not mentioned. In Joshua, the Ai is still east to Bethel, but we also find that it is beside Beth-Aven.

Grints concluded that the three cities were indeed close to one another, but have not existed simultaneously all the time. In the time of Abraham (or the time of writing Genesis) the Ai existed but Beth-Aven did not. Where in the time of editing the book of Joshua, Beth-Aven existed but the Ai did not.

Grints collected all the places in the Bible where the three cities appear and found out something quite surprising:

Bethel existed from the time of the patriarchs through the Bible until the return to Zion in the time of Cyrus.

The suggestion is that those two cities: the Ai and Beth-Aven did not co-exist. In each period only one of them stood in its place.

Going back to the excavations in Et-Tell, it is most likely that this site is Beth-Aven and not the Ai! 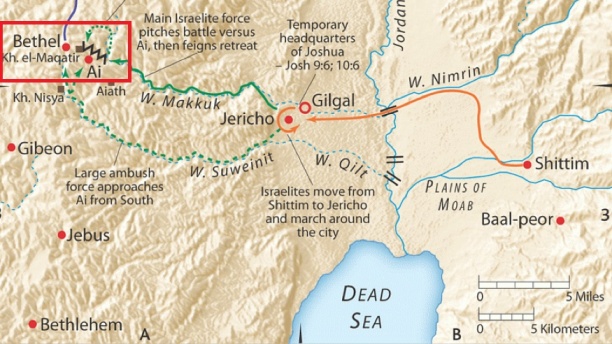 The place that was found and was originally identified as the Ai (Et-Tell) is probably not the Ai. It may be the ruins of Beth-Aven.

So where is the Ai? we do not know. This may be found in the future. But it is also possible that it will never be found. As it is written:

“So Joshua burned Ai and made it a heap forever, a desolation to this day” (Joshua 8:28)