“Speak to the children of Israel, and bid them make fringes in the corners of their garments throughout their generations, putting upon the fringe of each corner a thread of blue. And it shall be unto you for a fringe, that you may look upon it and remember all the commandments of the Lord, and do them.”

Orthodox Jews, use Talit – prayer shawl – in their prayer, that has fringes – tsitsit.

Those two customs are taken from the law as appears in Numbers 15, 38-39. See above.

In the English translation we read that there is supposed to be a thread of blue in the tsitsit. Is this right?

The color blue in the bible

The translation of the word blue comes from the Hebrew word “Tekhelet” (תְכֵלֶת). This word appears in the bible 48 times. Most of the times in the description of the tabernacle as given by Moses.

“Moreover thou shalt make the tabernacle with ten curtains of fine twined linen, and blue, and purple, and scarlet: with cherubims of cunning work shalt thou make them”

In other 6 occasions, only blue and purple without scarlet:

“Silver spread into plates is brought from Tarshish, and gold from Uphaz, the work of the workman, and of the hands of the founder: blue and purple is their clothing: they are all the work of cunning men.”

But according to bible scholars, those blue, purple and scarlet are not colors, but rather materials.

In fact, the words blue, purple and scarlet never appear in the bible as a colors, but always as a materials that are used in cloths.

Because blue and purple appear so many times together, we may get to the conclusion that they are in fact the same material or two variants of one material.

But what is this material and what was its color? And why do we translate it to what we know today as blue, purple and scarlet?

Some more light on our question

As mentioned above, the bible does not give a hint to what the color of the material “Tekhelet” is.

In the Talmud, that was written between the third and fifth centuries AD, we read that there are white and blue (Tekhelet) threads in the tsitsit. It tells us that the “Tekhelet is like the sea, and the sea is like the skies, and the skies are like the Throne” (Masekhet Minkhot 43, Beit)

We can conclude then, that the color is really blue.

Can we? not really…

So according to this quote, the Tekhelet is green!

Fortunately, we got another quote from the Talmud that teaches us some more facts about the Tekhelet:

“This snale, its body is like the ocean …. and with its blood the Tekelet is dyed, and therefore its blood is very expensive” (Menakhot 44, Alef)

So the Tekhelet is a pigment that was created from a snail!

And indeed, we know that the Phoenicians had an industry of manufacturing dye color from marine snails. Evidences for that industry were found in some of the antique Phoenician cities in Israel.

There are two species of marine snails from which the dye was produced: 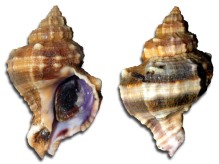 The colors produced from those snails were dark blue or scarlet.

The knowledge of how to produce the color from snails disappeared in the seventh century after the Muslim conquest of the Middle East.

What is used today as Tekhelet?

It is written in the Talmud:

Therefore, until today, Haredi orthodox Jews do not use the Tekhelet in the tsitsit but only white threads.

However, in Israel today, the production of Tekhelet from the marine snails was renewed and you can get real “Kosher” Tekhelet threads. Many religious Jews these days are starting to wear Talit with Tsitsit that has blue threads in it.

More information about the production of the Tekhelet in this site.