We Jews, are called after our father Judah – Yehuda in Hebrew (יְהוּדָה), the fourth son of Israel.

What did Judah do to get the honor that all of the Jewish people are called after him?

In Genesis 49, Moses blessed Judah with a special blessing:

“8 Judah, you are he whom your brothers shall praise;
Your hand shall be on the neck of your enemies;
Your father’s children shall bow down before you.
9 Judah is a lion’s whelp;
From the prey, my son, you have gone up.
He bows down, he lies down as a lion;
And as a lion, who shall rouse him?
10 The scepter shall not depart from Judah,
Nor a lawgiver from between his feet,
Until Shiloh comes.” (Genesis 49: 8-10)

Although he was the fourth son, he was the one who got the best blessing. Judah was compared to a lion!

This is a blessing that prophesied the role of Judah in the genealogy of the Messiah!

The first three brothers did not get the blessing. Reuben, for defiling his father’s bed; Simeon and Levi were cursed for killing the men of Shechem.

What was it in Judah that gave him the primacy and blessing from his father?

The name Yehuda, comes from the word “Hoda” – To praise and give thanks. This is explained when he was born:

“And she (Leah) conceived again and bore a son, and said, “Now I will praise the Lord (of give thanks to the Lord. R.S).” Therefore she called his name Judah.” (Genesis 29:35)

The Hebrew word “Toda” (תּוֹדָה) that means “thanks” comes from the same root of Hoda and Yehuda.

And indeed. Judah has a special role among his brothers when they meet Joseph in Egypt, while they do not know yet he is their brother.

Joseph was playing with them for a long time. The ten brother went to Egypt to bring grain for the famine in Canaan, while leaving the youngest – Benjamin – with his father.

When Joseph saw them, he recognised them but acted as a stranger to them. First, he blamed his brothers that they were spies. He took Simeon to prison, and commanded the rest to go to Canaan and bring their young brother Benjamin to him.

After some time in Canaan, the famine was strong and the grain was finished, they needed to go to Egypt again. But this time, they knew they had to bring Benjamin with them. Jacob could not accept this. He did not agree to send his young son with them. At this point, Judah promised and gave his word to be blamed forever if Benjamin would not be back. It was a strong burdon Judah takes upon himself!

In Egypt, Joseph continued to play with his brothers. This time he gave them grain to take back, but commanded to put his silver cup in Benjamin’s sack. When they had left, Joseph sent people to chase them and look in their sacks. The silver cup was found in Benjamin’s sack, of course. Joseph took Benjamin to be his slave because of this allegedly theft.

Judah could not accept this fate, knowing how his father’s heart would break. And he spoke to Joseph begging to be his slave instead of Benjamin:

This is the point that Joseph broke down. Judah really spoke to his heart and he could not go on with his game.

This is the point when Joseph confessed to his brothers. He wept loudly so all Egypt could hear.

In this story, Judah appeared as the brother that his father could count on. He took on himself something that seemed impossible, and made a change while being accountable.

This is indeed why he is called Yehuda – for his father could give thanks to God of this son. He is indeed a lion!

But This is not the end of the story with Judah. in Genesis 38, after Joseph was sold and before we read what happened to him in Egypt, There is short hidden episode:

This is the story of Tamar. A girl that married one of Judah’s sons: Er. But Er dies, so Tamar was given to his younger brother: Onan. But Onan did not want to give Tamar a son, and he dies too. So Tamar was now supposed to wait for the third son to be old enough to marry her, but this did not happen either. And Tamar wanted a child so much!

What did she do? she waited for Judah where he went to shear his sheep, and pretended to be a harlot in the dark night. When Judah wanted to come to her, she asked for something in return, and he gave her his signet and his cord and his staff – Three personal items.

Three months later, Judah was told that his daughter-in-law – Tamar – was pregnant with a child by harlotry. Judah immediately commanded that she would be burned!

Now, as in a good drama, Tamar showed the three items: the signet, cord and staff, and said: I carry the child of the person to whom those belong.

In this point of the story, we learn something new about Judah: He could have said: she is a liar! She stole those from me! and burn her anyway. But he did something different that showed his generosity:

So Judah acknowledged them and said, “She has been more righteous than I, because I did not give her to Shelah my son.” (Genesis 38:26)

Judah confessed his fault instead of continuing blaming.

The word “confessed” in Hebrew is “Hoda” The same word used for “give thanks. The same word on which Yehuda was called. Yehuda is the son for which his parents could give thanks to the Lord, and he is the one who confessed about being unrighteous.

This is Yehuda – Judah.

And after his name, we, Jews are called. 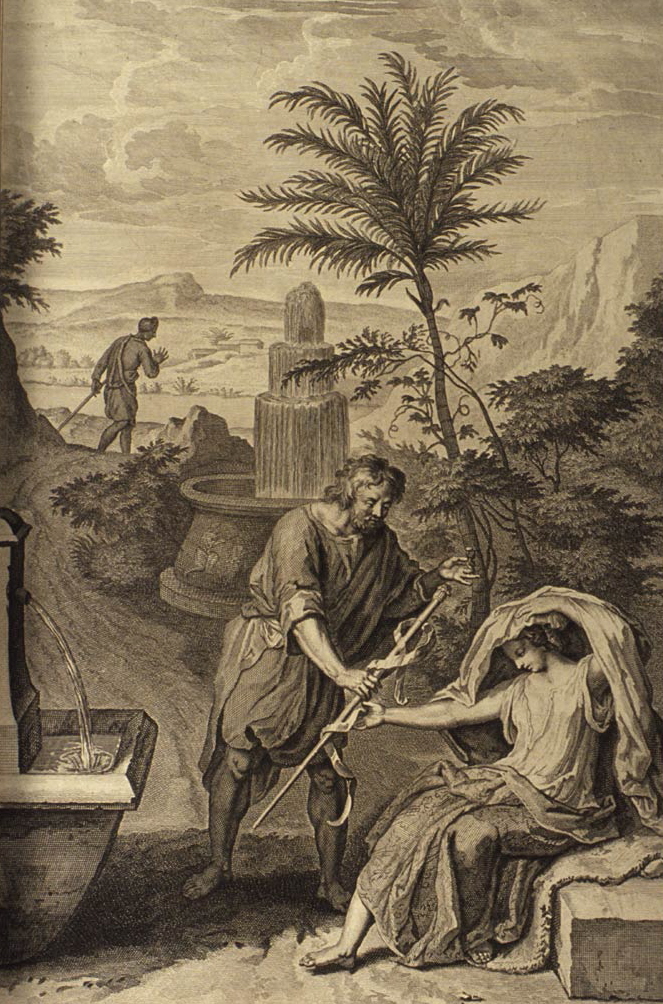